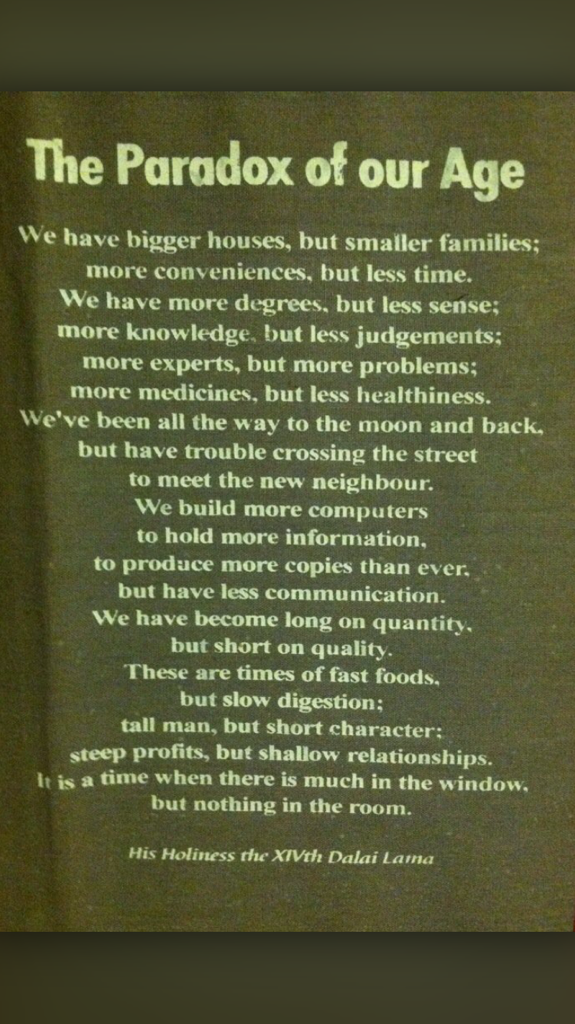 These words from the Dalai Lama summarize the modern day so well. This plaque is hanging on the bathroom door of a small coffee shop in Salt Lake City. It has an interesting story behind it; my nephew, (age-eighteen) is a Barista. After becoming a coffee and tea enthusiast and experimenting a lot on his own, he found a job that he loves and a skill in which he has developed on his own; he makes it a part of his employment, and it is something he thoroughly enjoys. He has taught me all kinds of things about coffee and tea that I would not have known otherwise. People, including me, are impressed with his knowledge and skill that he has picked up during his time as a barista. It always amazes me just how much detail is associated with coffee and tea!

My nephew has managed to become a highly skilled barista, humorously, yet truthfully referring to himself as a tea snob, (one that is kind, I might add.) Despite some setbacks with having Dyslexia, he is a proud barista who is highly skilled and with knowledge to boot, and is seeking to continue to further his expertise. He also owns a lawn care business in the summer, where several other guys work for him! Yes, during the summer he has extra money to experiment with all of his fancy teas. 🙂

As schedules permit, he and I meet up to talk, laugh, reminisce and philosophize. We laugh about many things, including the group of people who, during each visit will walk into the coffee shop, meet, hug, shake hands, greet for a few seconds and then all whip out their gadgets. This brewed our ironic joke: “Let’s all meet at the coffee shop, so that we can all text our friends.”

We also laugh together about how in this day and age, with things so upside down and backwards from where they should be, everyone has a vice. The difference is, some are aware of their vice, as some vices are more obvious than others, (taking place in the physical sense.) Others, are not aware of theirs, (in the mental sense,) such as beating themselves up over being addicted to Diet Coke, for example, (much of my family. 😉 Love ya’ll! peace, hominy, hummus and humus.)

In the end, it’s something that my family and I, and especially my nephew and I can chuckle about. Remember that everyone has an inner-genius and also an inner-freak. The two are often closely related and are itching to jump out to see the sunshine!

On that note, with much to think about, particularly the wise words of the Dalai Lama, I think it’s time to unplug. After tying up a few loose ends via email, I will be taking spring unplugged time, a rest from the computer,web posts, and general gadgetry. Time length? Not sure yet; guess I’ll know when I get there. If you can, join us. There’s always life…

Owen and the Barista.