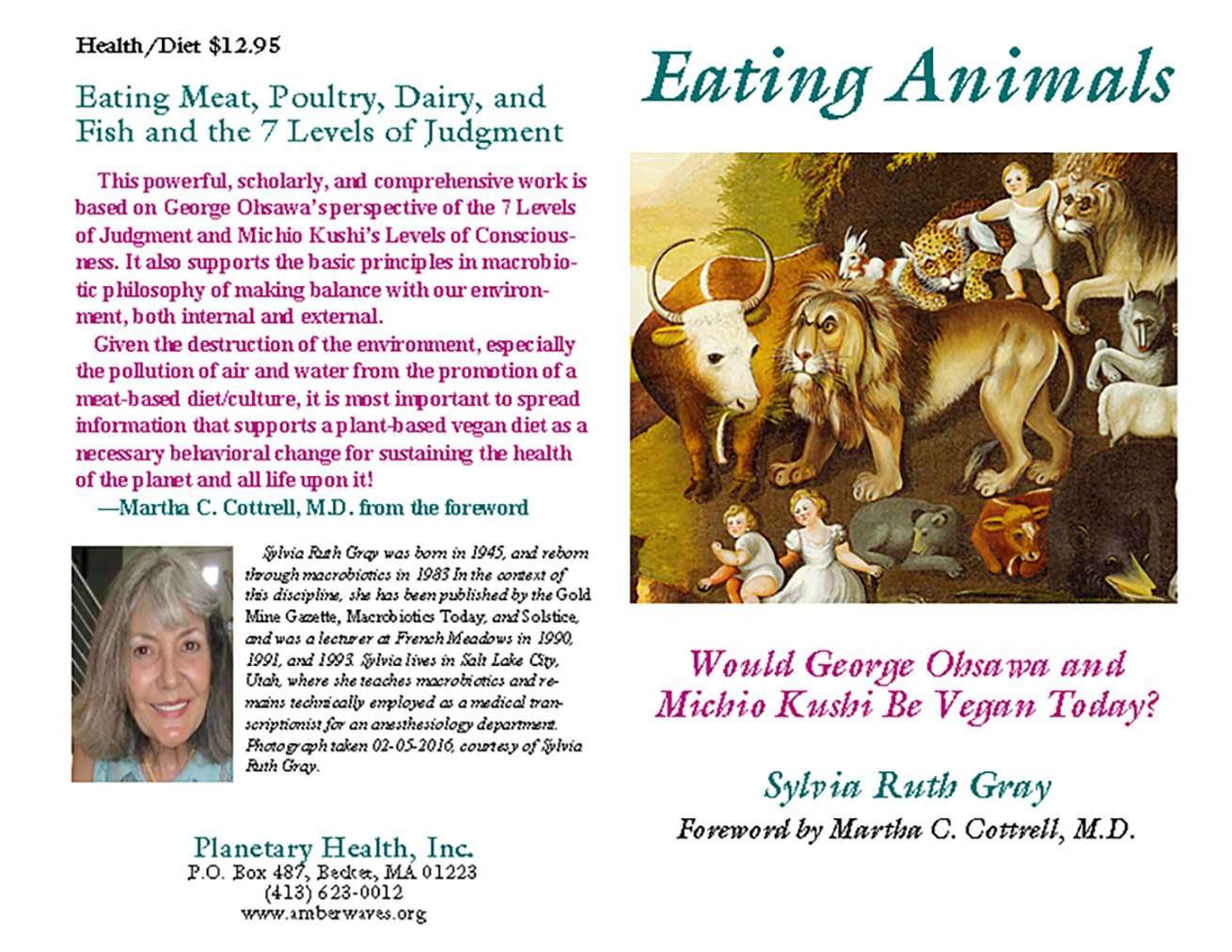 In reference to this post,
let’s face it, vegan diets are a new, urban creature. The impacts of vegan health have only been recently studied and researched. Research now continues, but with so little history in what is essentially uncharted territory, in some aspects we must rely on observation, experience, trial and error. Maybe vegan and standard fare can’t be compared as far as health is concerned. We are largely on our own in navigating our way through optimal vegan health.

May I introduce the discipline of traditional Japanese macrobiotics. Macrobiotics may provide some key missing links to an existing healthy vegan or plant-based diet. I have referred to it as “vegan blackbelt” stuff. Some concepts include not forcing certain amounts of fluids for some, adequate sodium intake, (quite possibly more than you realize-being vegan, including cooking grains with salt) and eating plants native to your ancestral (genetic) regions. For example, caucasian vegans may do well to go easy on tropical fruits and nuts, especially during winter. These guidelines are some of the key missing ingredients to a vegan or plant-based diet that benefit heart, bones, kidney health and even strengthen the immune system.

As with any worthwhile discipline, it deserves thorough study, and the various degrees are far too in depth to fully expound here. It is deep and multi-faceted. An ocean of exploration combining macrobiotic and plant-based diets awaits.

Now I turn to my friend Sylvia Gray with an introduction of the concepts found in macrobiotics and her book:

My teachers, Herman and Cornellia Aihara were taught by George and Lima Ohsawa. Ohsawa learned some of what he taught from the books of Sagen Ishizuka, M.D. He coupled Ishizuka’s Na-K understanding of diet with an amalgam of philosophies from Buddhist, Christian, Shinto, etc. sources, and called it Macrobiotics.
Macrobiotics has undergone radical change since it was initially taught, reflecting the understanding or misunderstanding of Ohsawa’s diverse students. Some groups are using no oil and next to no salt, and people in Scotland are eating cashews. One of the growing points of difference has been the progressive weakening of the no dairy-no meat-occasional fish! With the trend towards increased acceptance of foods sourced from the animal kingdom.

The book promotes a vegan-style macrobiotics, looking at the topic through the lens of Ohsawa’s “7 levels of judgment.” It was published at the beginning of 2016 by a press on the East Coast, which I used to help ensure a wider dissemination of the ideas. That publisher is a disciple of Michio Kushi, the name most commonly associated with macrobiotics.

The publisher created the title and controlled the length of the book. I had to crunch a ton of text into the end nodes. Also, there are places where I don’t use enough words. Please ask me questions!
The publisher also controlled some of the text. I am telling you this because of the confusing pro-eating-animals quote from Michio Kushi near the beginning.

The book contains many valuable facts, and can function as a source book. Example: Humans diverged from all other animals 2-3 million years ago when we stopped making the sialic acid molecule called Neu5Gc. From that time, the animals could eat the animals but human bodies would interpret the milk and flesh of mammals as an allergen. Research in recent decades has shown Neu5Gc to be carcinogenic for humans, as well as inflammatory.
*** -Sylvia

You can download Sylvia’s book by clicking the image above. She asks for a donation of $3.50 through Paypal with her email address: sylviaemail@gmail.com to help feed the many pigeons that have claimed her yard as their home.Many pigeons use large quantities of seed. Donations are appreciated.

This concept is very detailed like the assembly of a device with many nuts and bolts. It is a discipline requiring careful observation, study and consideration. This is why Sylvia encourages you to ask questions. You can email her with any questions you have about traditional macrobiotics as they relate to plant-based diets.

Since plant-based and vegan diets are new, sometimes clarity is needed on the path to health. It is a journey, and a healthy practice is to consider both the preponderance of evidence in adopting a healthy pattern, and listening to your own being, (spirit, mind, body).

Recently I had personally suspected that certain foods were best for me as rare occasions and fun food. This was later confirmed by what I learned through Sylvia and macrobiotics.

Enjoy the journeying through the practice of the many layers or “belts”, a long life of learning and study, patience, persistence, trial and error.
Strive to thrive.