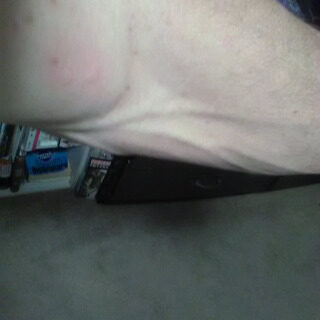 Any ideas as to what creature bit my arm?
Check out those welts! The photo doesn’t do them justice either. They were red and swollen like a typical sting, and even a week later I still have red bumps!

If you guessed one of the hymenopterans… That is a good guess and it would seem obvious, but ultimately incorrect.
You won’t believe this…

It was the bite of a Lacewing larva (very similar to an antlion)! I’d been outside in the garden, and then just went inside again briefly when suddenly it felt like needles in my arm! I pulled up my sleeve and I saw the unmistakable massive jaws clamping down.

Who’d have thought right? No joke; unfortunately, I didn’t think to snap a photo of it in the act. 🙂 I just wanted it to let go of my arm.

What did I do with it? Gently pulled its vice-like jaws off of my bicep and released it in the garden of course. They are beneficial insects, harmless to humans but pack a wallup!

It’s a great time of year to seasonally unplug if you haven’t already. It was the first chance I had for seasonal unplugged time in awhile since I was finishing university. I took several days and it was so refreshing. I highly recommend it, but try to avoid antlion-like larvae. They hurt.