Hi, my name is Owen Staples. Thank you for visiting my website! I am a Wellness activist, who adores the natural world (naturalist) with an emphasis on plants, background in horticulture with the natural world outlook, (botanist.) I am one who actually reads plant encyclopedias in libraries on my leisure time! Early in my research, when I realized that taking care of my own health, is also helping to heal the earth, I was absolutely fascinated. I have invested a lot of time and energy into education from this standpoint. I work at a small specialty store that services and sells tropical plants. I have a detailed background with mental health. I teach for NAMI, Utah , B.R.I.D.G.E.S courses. My own approach to wellness emphasizes the need for time outside, the connection between the spirit, mind and body, the importance of the nourishment, nurture and care of each, and the importance of knowing oneself as an individual. I share this that I have learned with others also. Asserting one's needs, and filling one's glass are some fundamentals of what I teach. I am a naturalist, wellness activist, plant guy. I have a background in horticulture. I have found that botany and horticulture and the two complement one another very nicely. I emphasize both indoor well-being and time outside, plant-based nutrition, balance, and asserting one's needs as an effective route to wellness. Current interests include: Xeriscaping, interior-scaping, bio-active substrate in terrariums, nature's methods of correcting imbalances, and wild, edible plants. I enjoy observing weather, trees, insects, birds, fish, and reptiles in nature, and as seen throughout the globe. I also enjoy music, Chess, Medieval history, (particularly the almost unknown pursuit of the study of plants and herbs of the time,) laughter and life. I live in Utah. Thank you for reading.

You can’t really complain unless you are doing something to bring about the change.

I submit that Bernie Sanders is a key first step to facilitate this change.

As a health educator with emphasis on the environment, prevention and wellness, I can see that a fresh perspective and approach is needed. Like it or not, making change for human health and the environment is going to involve voting and government. I know what you’re thinking “Yuck” and I don’t blame you. But to turn a yacht 180 degrees is going to take someone who knows the ins and outs of turning yachts.

While you and I can volunteer, donate, consciously eat, breathe, drive and live, which does help, it is not enough by itself.
The current problems are a big, wiry, entangled, complicated mess and it’s going to take legislation, regulation and leaders with vision to at least start things in the right direction.

I couldn’t believe it when I found out the #1 cause for bankruptcy in America is medical debt(Sultz&Young,2018, 9th ed.). What about single parents with no insurance? This is why something like their child’s ear infection can and does equate to bankruptcy.

Not only do the birds choose him, (see this video): Bernie’s bird but his policies are spot on also. Bernie can see clearly and is not in denial.

Why… Do. Birds?? (Bernie Sanders Remix) from Nick Dunn on Vimeo.

Bernie’s policies would shape and change a few key areas:
1) Healthcare for all, using a single payer system, similar (or rolled in with) Medicare.
2) Fair living wage. Sanders would place the minimum wage at $15 per hour.
3) Getting special interests and big money (lobbyists) out of government.
4) Big corporations will be forced to pay fair taxes instead of hiding off-shore, moving to other countries, and other ways of dodging taxes.
5) Climate change. Sanders will address climate change, and the USA will be the world leader in this effort.
6) Make the wealthiest 1% pay fair taxes instead of pillaging the middle class to further enrich themselves.
7) These will improve the quality of life for many reducing stress, mental illness, crime and poverty.

Vote (both at the ballot and with your daily spending of money). Donate. Donate to Bernie Volunteer. Live consciously. Be willing to take steps in bringing the change you want to see. 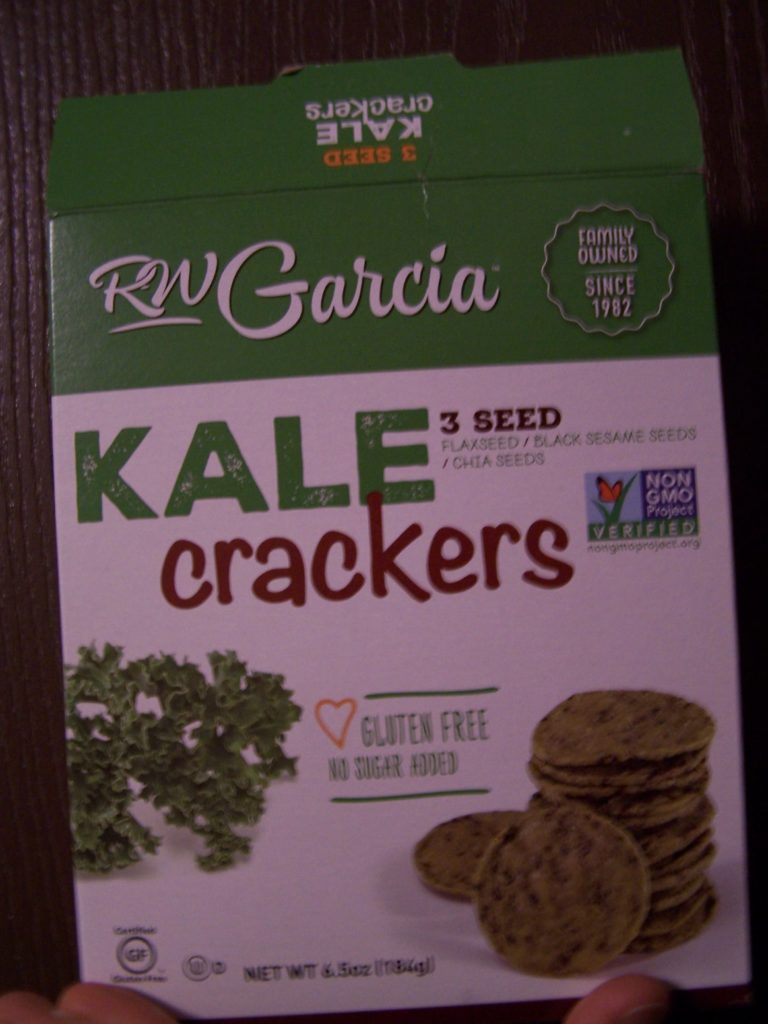 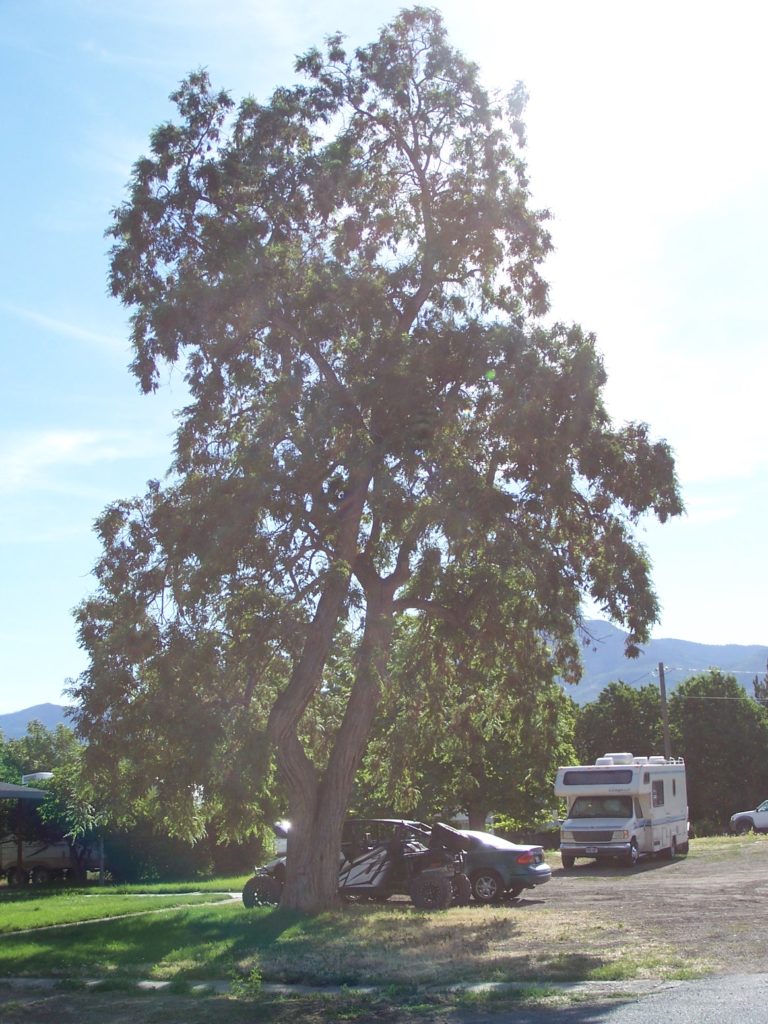 Understanding world problems is a step toward solving them. I highly recommend the course “Social Problems;” it is very eye-opening. Consulting sociologists in conducting the business of humanity is common sense, but unfortunately this is not so common(Eitzen, D.S., Zinn, B.M., Smith, K.E.,2014.).

Informing yourself is a good practice. Here is an excellent blog: Any Good Thing; A Sociologist’s Perspective

Toward positive change and awareness we go. Remember that “perma-optimism” is at some point a form of denial and complacency. Until humanity reaches that happy and peaceful state, there is plenty to do. Baby steps, and sometimes giant leaps. Neither is the answer to pass the buck and buy into the illusion that you are powerless. Bring the change you wish to see. 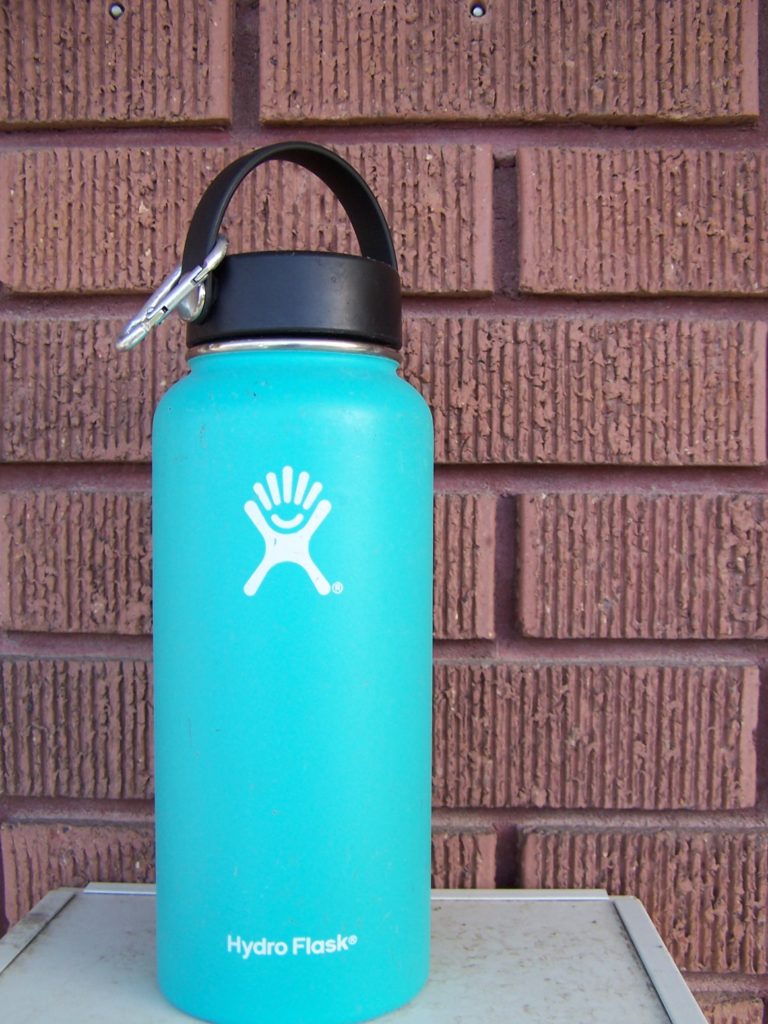 Here is to Utah’s only native species of salamander! This group of tiger salamanders was a rare find in the yard and I was delighted to stumble across them. I was glad that the people I was working with promised to watch out for them and help them sustain their moisture and cool temps (in a desert they need all the help they can get) as they water the trees. Remember that all creatures have a place. These guys are beneficial to people because they help to control harmful insects naturally; so be sure to provide a cool and moist retreat for them if you notice some in your area. These were found in a small moist burrow caused by slow and steady drip from the hose. 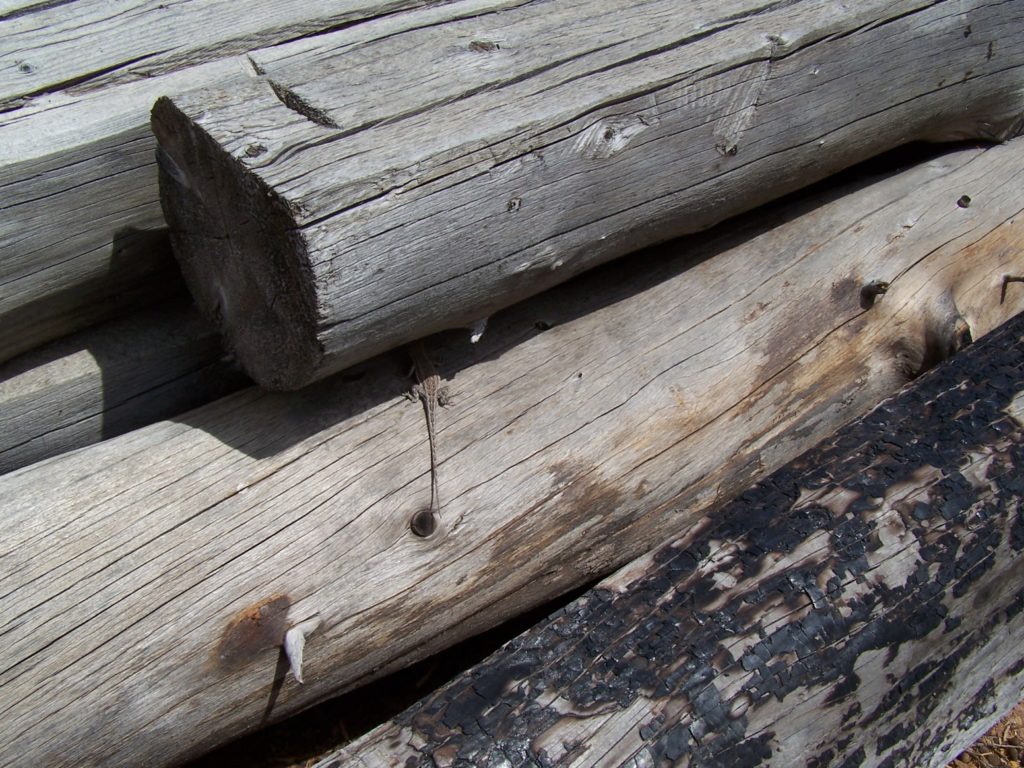 While you can only see his tail and back, this is a lizard from the area that is also beneficial because it eats lots of locusts! 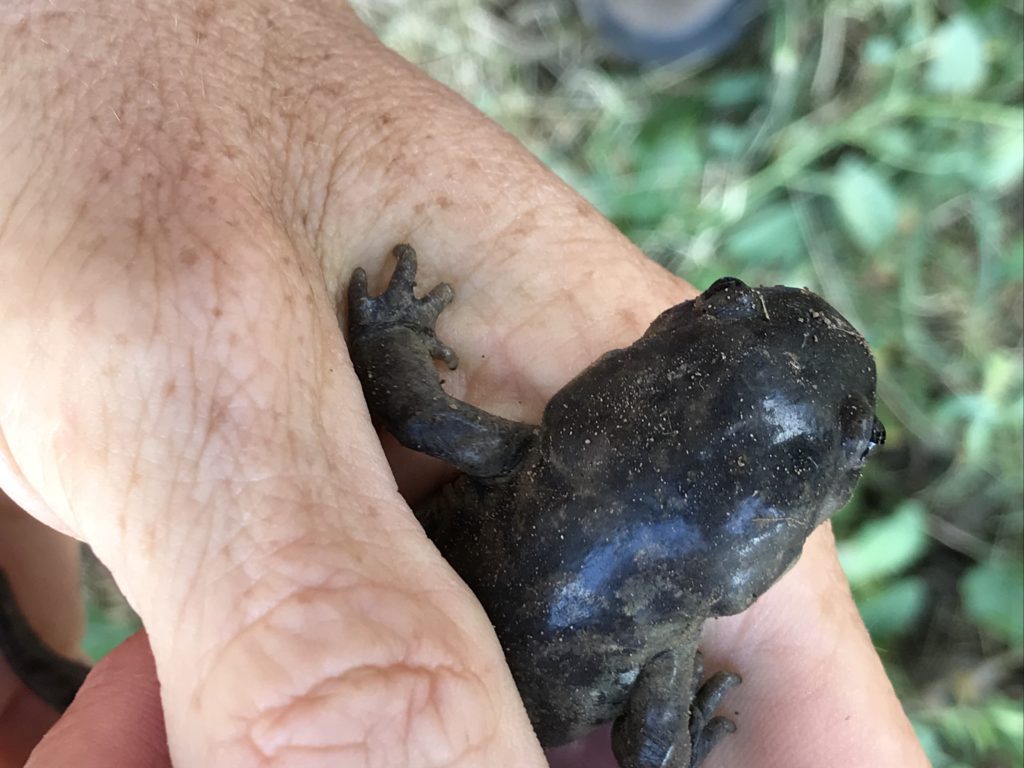 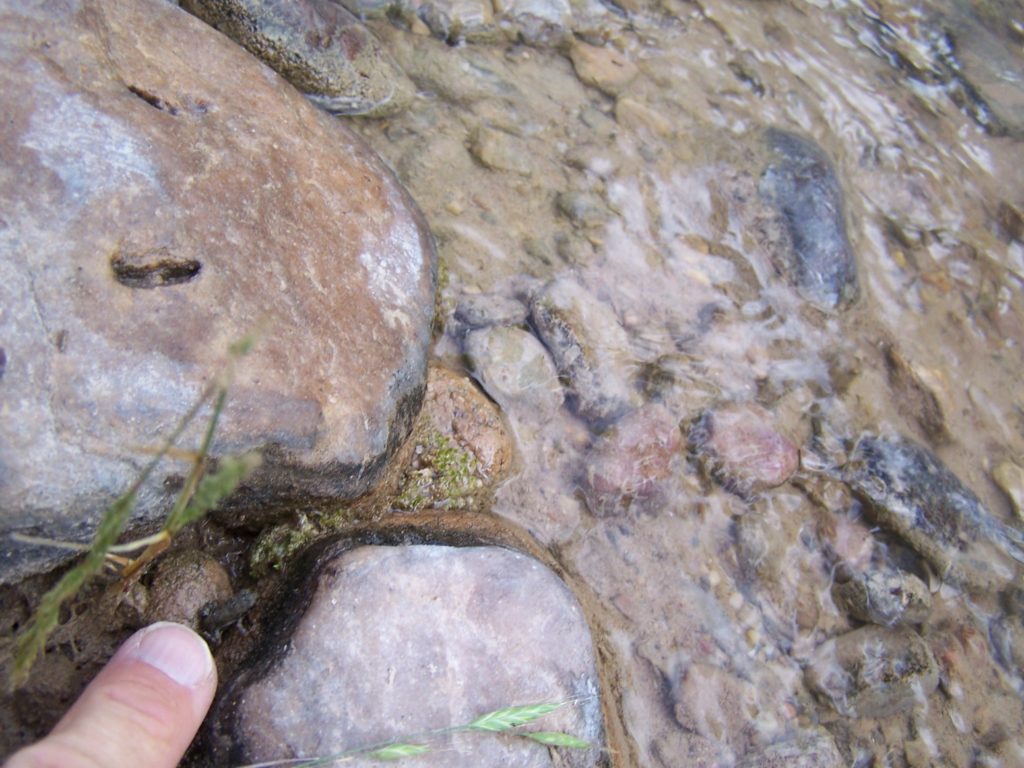 Well it’s a figure of speech. But if it were a quantitative literacy problem it would look like this:

Live lightly on the earth today. What does that entail?
There’s where the fun begins for you in getting educated about just that!
Enjoy the journey.
-Owen 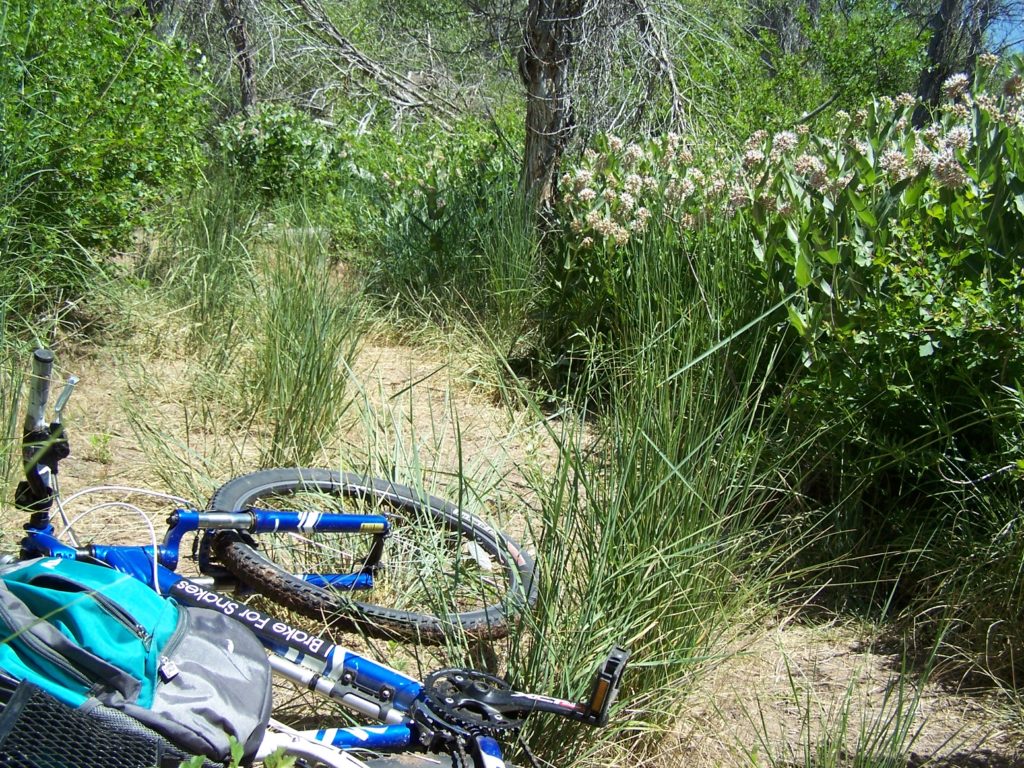 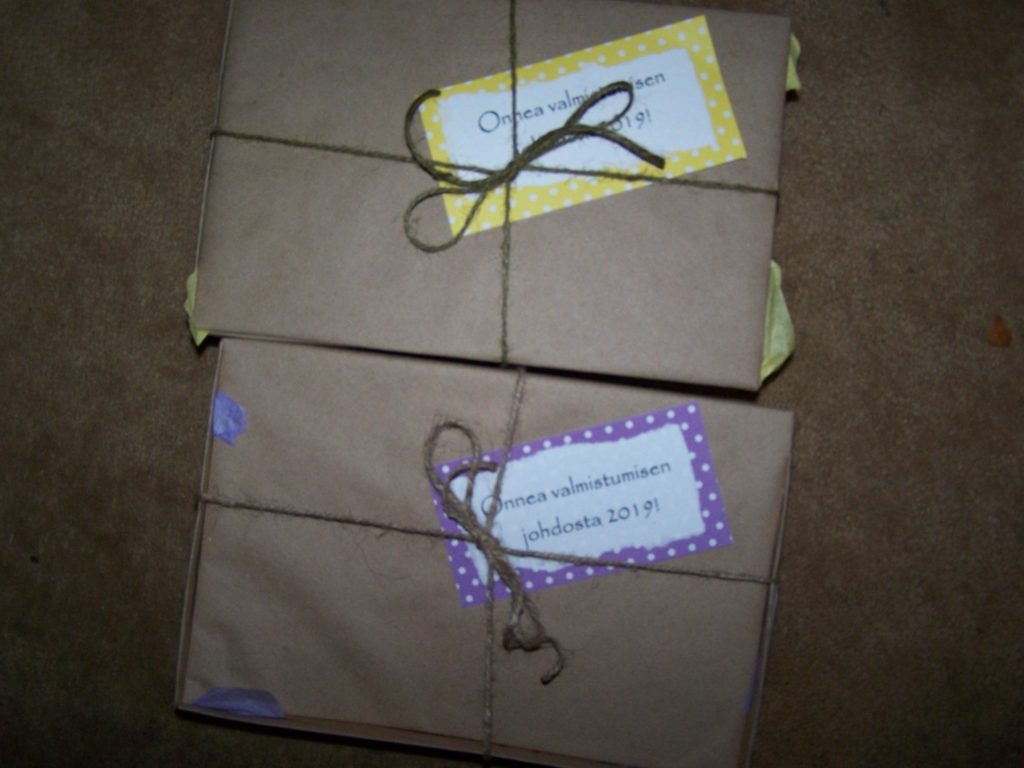 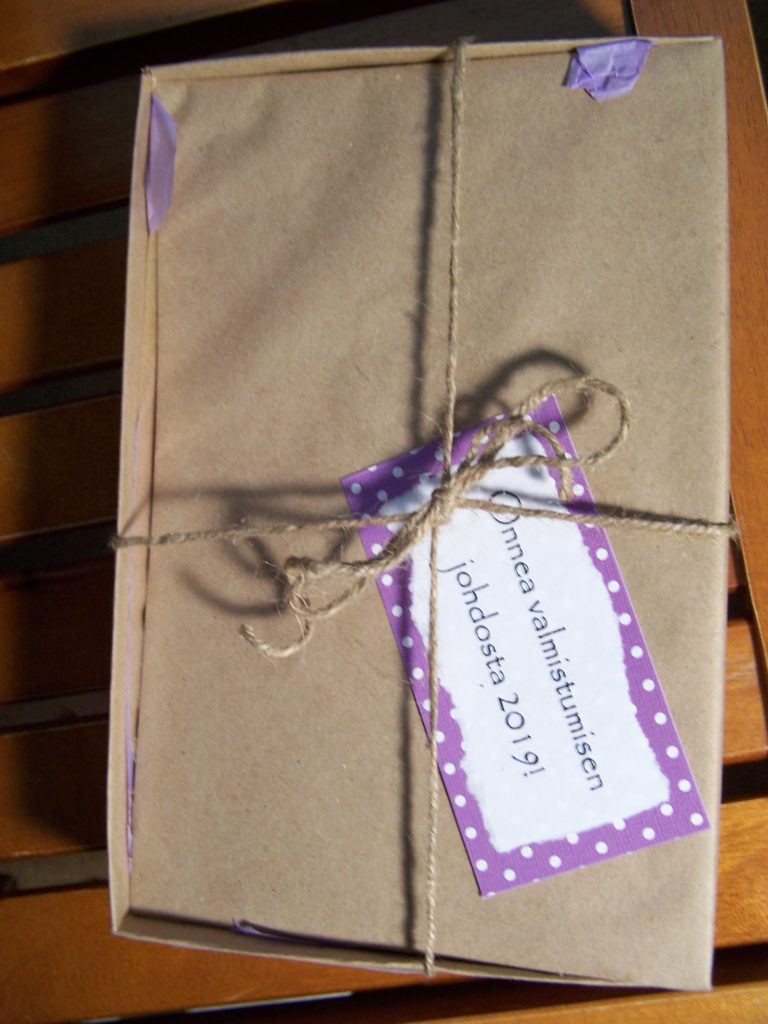 “Can you read this? Of course you can’t; that’s because it’s written in Finnish.”
The vegan Finnish cookies were a hit. As I said, you simply have to try Terhi’s cookies. 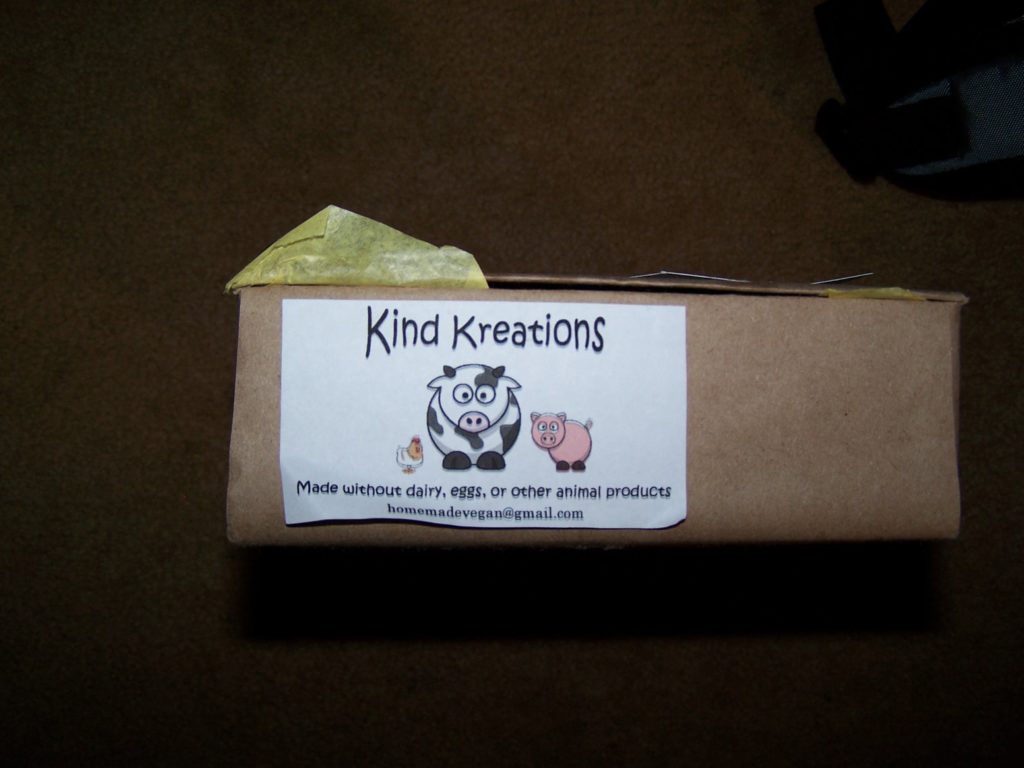 I understand that she is working on a other special creations, the health-side vegan cookies: non-GMO, sweetened with stevia etc.

While we’re on the topic of Finland, cookies, vegan cookies that originated in Finland, never forget about this interesting tidbit from the health and wellness standpoint: Finland is right up there with Denmark in terms of being among the happiest people on the planet. There are several studies, articles and documentaries about this. Here is the link to an article from Linkedin a few weeks ago:

In terms of happy people, the Scandanavian countries have some really good things going, from which we can all learn and strive to emulate.

Here’s to a full glass and happy people and planet.

With that, be sure to try some vegan cookies from Finland!
When I talk to people about eating well, plant-based diets, veganism etc I’m always enthusiastic to tell them about Terhi, my Mormon vegan friend from Finland. Terhi is one whose entire family (husband and three teens) eat plant-based, (vegan in fact).

You just have to try her cookies. Even the packaging of the cookies sports the philosophy of reduce, reuse and recycle.

Thank you for reading,
Owen

Comfort is good until it becomes complacency with tunnel vision; the two often go together.
It is a time to be proactive!

As promised, here is the orchid photo after the new blossom. You know it’s that time of year later winter into spring. Sun, snow, rain all in a day.
Enjoy, hereux Vendredi, and have a fantastic weekend! 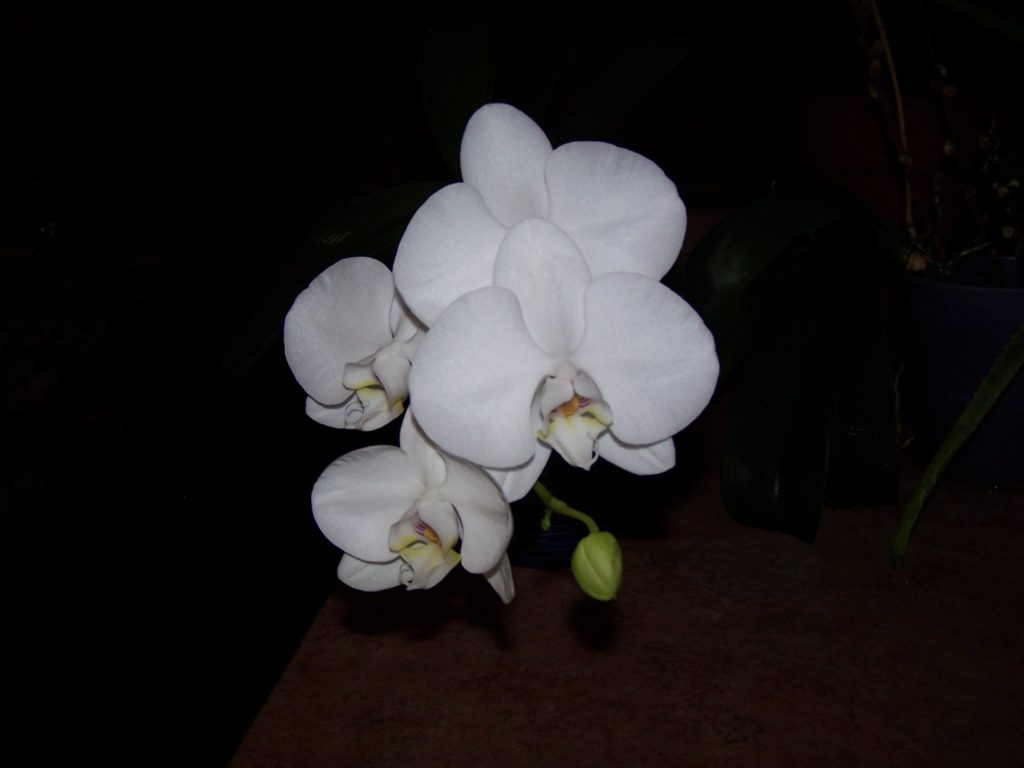 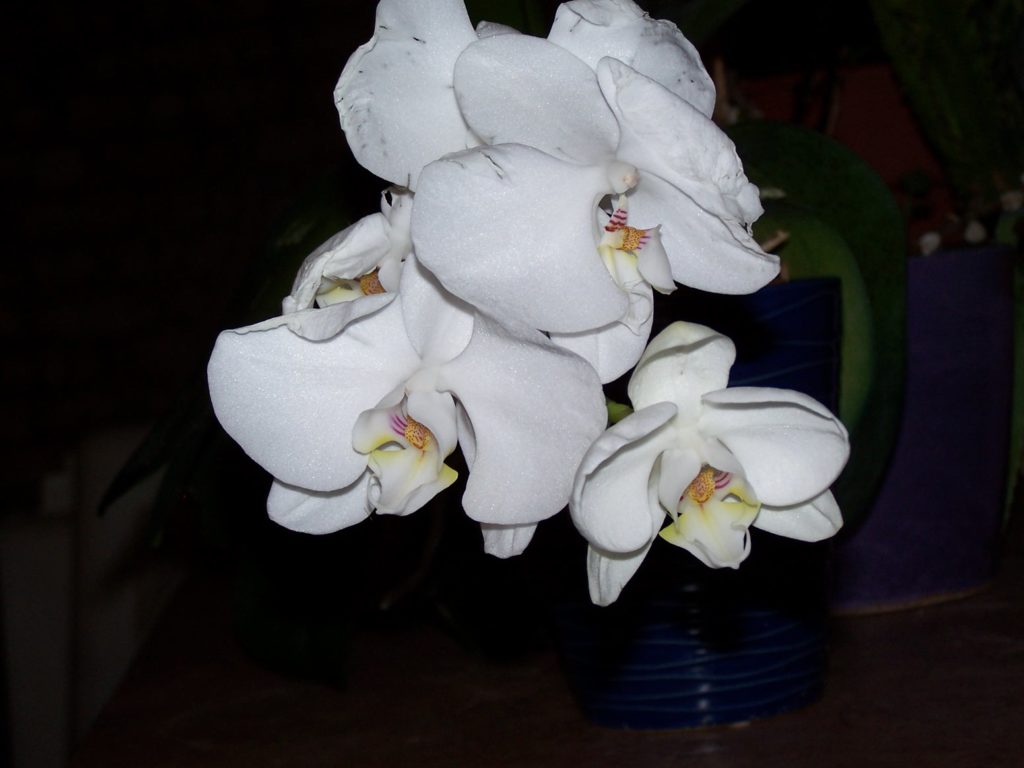 PS, nevermind the dog hair, but I couldn’t resist adding this photo of a spider I saw in my house. What did I do with it you ask. The answer is… 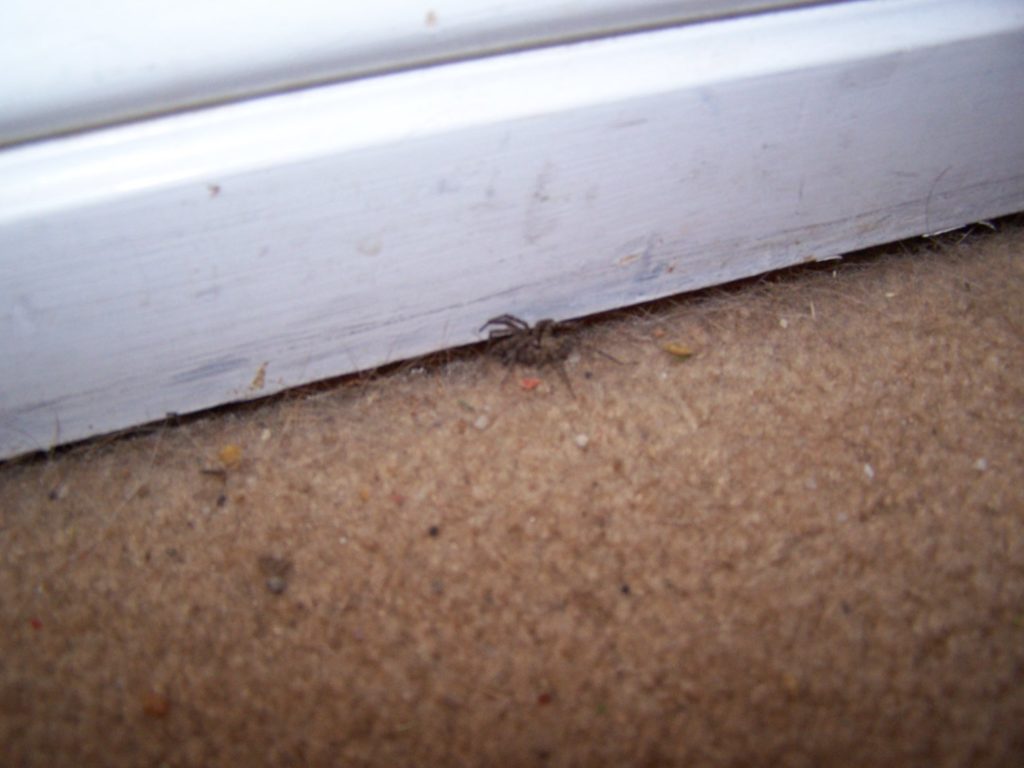 of course not! It was too cold outside; 🙂 so who knows where he is now, (yes, I do believe it is a male).

Before and after. I have some moth, or Phalaenopsis orchids, which have been given to me over the years and/or picked up from employers etc.

You can see them in these photos with buds forming, just prior to blooming and then the reward that is well worth the wait. Look at the spectacular blossoms! He’s not finished yet either. Notice the two green buds that will blossom in a few days. I will provide updated photos when they emerge.

Moth orchids require patience, cooler temps and a bit of luck to again see blossoms after their flowers have been spent. One of my three bloomed this year. This is why oftentimes they are unfortunately discarded after flowers have faded. I say hang on to them, providing care, talk to em’ if you want and they may just reward you. Moth orchids are beautiful and their blossoms last for a long time.

If local, one of my favorite places,Cactus and Tropicals not only has an excellent selection of moth and other orchids, but they also have Utah native perennials, shrubs and trees, water wise plants suited to a desert landscape. We do live in a desert! Let’s keep this fact in mind when landscaping and be sure to check on their water wise plants when landscaping this spring (only weeks away)! Water conservation is everyone’s responsibility. 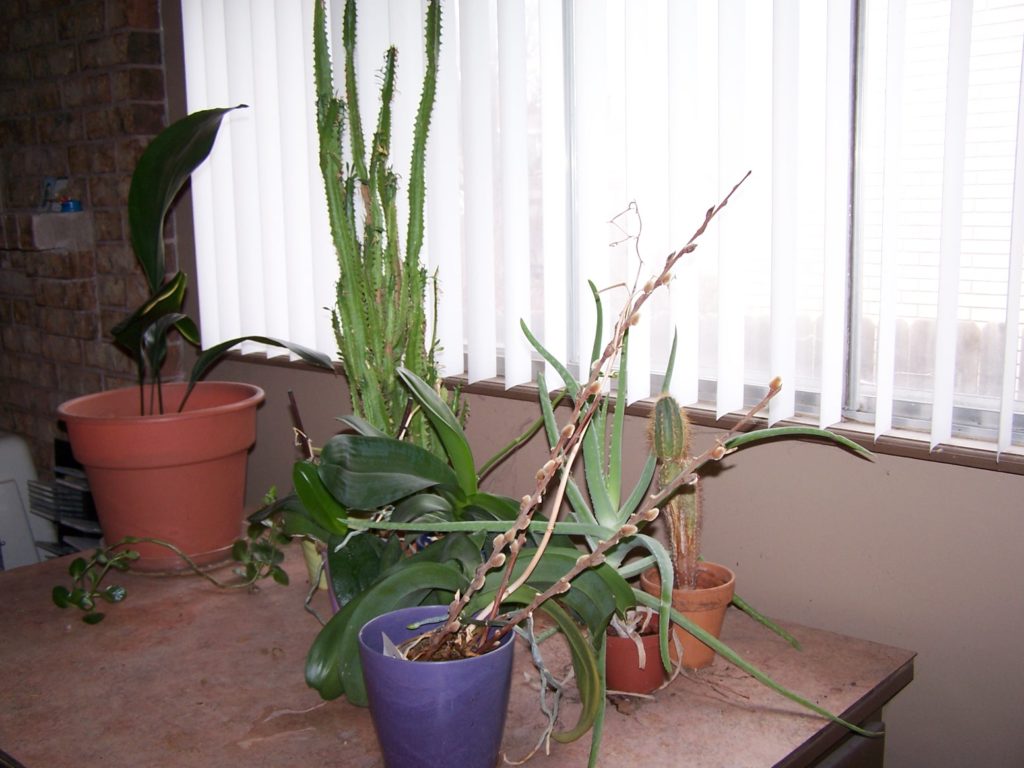 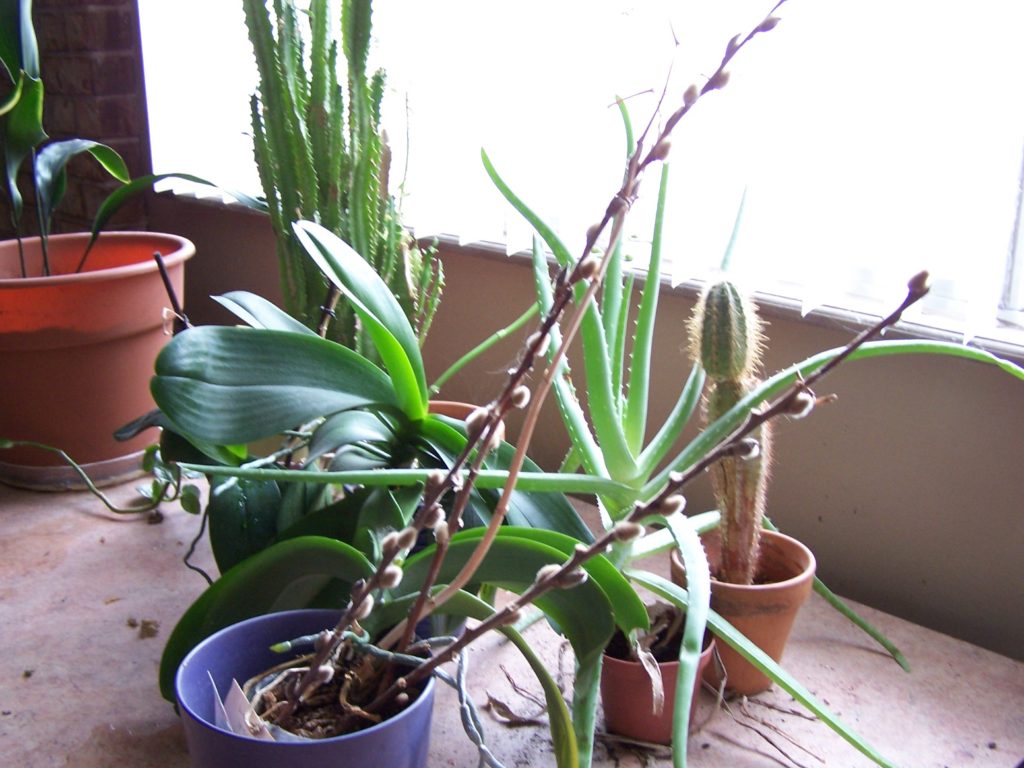 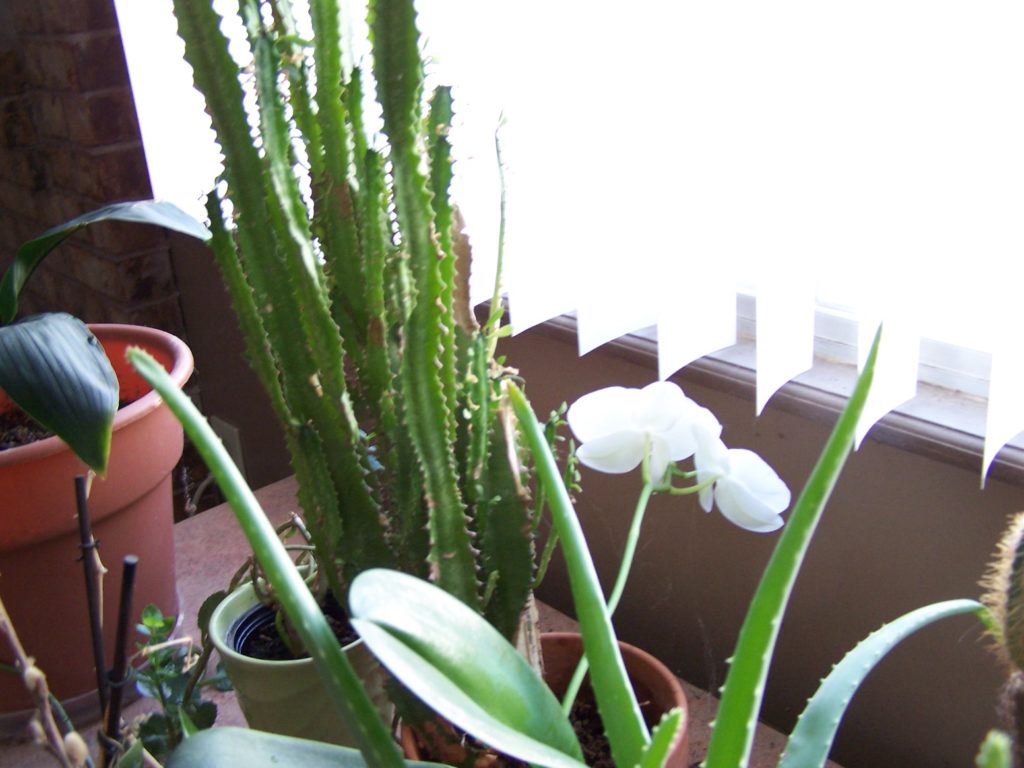 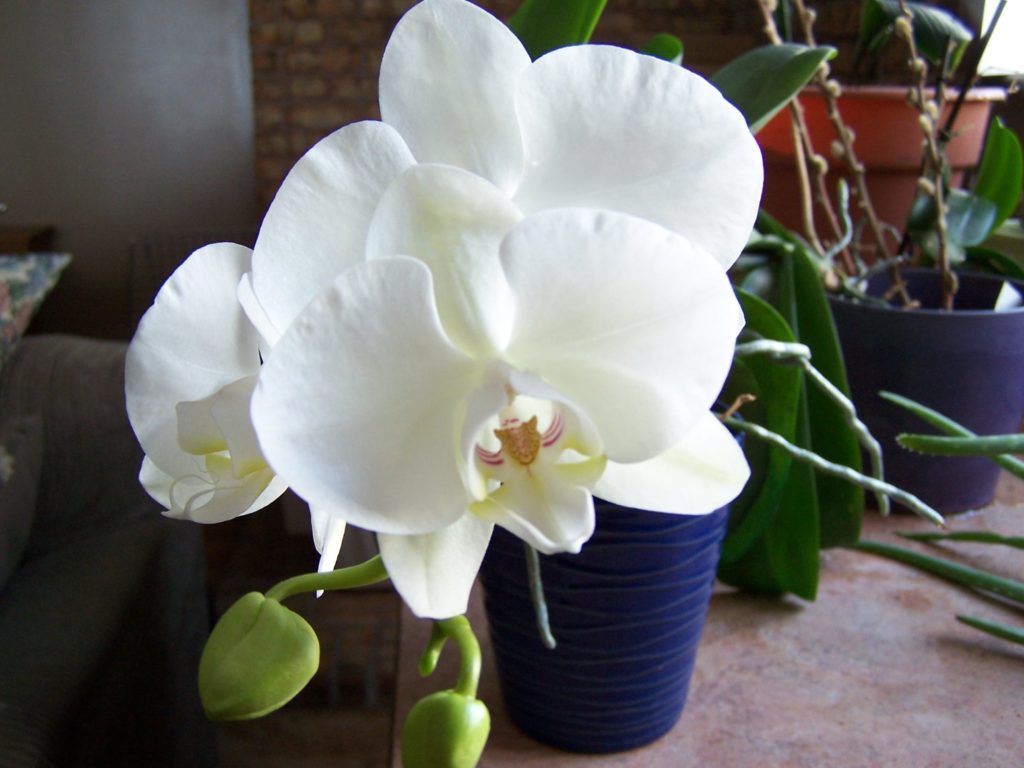 Focus on beauty. Tend the orchids, plant the garden, save water as you do, “and it is approx. seventy-three degrees within my household. Thank you.”